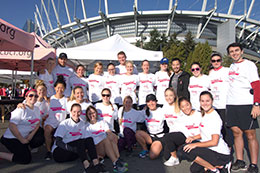 Second year MPT students at Run for the Cure

Thirty students from the Class of 2018 came together to support breast cancer research in the annual CIBC Run for the Cure in early October. Our team placed in the top team fundraisers, raising over $7000 for the Canadian Cancer Society. Some walked, some ran the 5 km, but all had a fun time! Not to mention a well-deserved brain break from the semester. 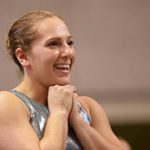 We’ve had another reason to celebrate this month – our very own trampoline gymnast, Samantha Smith was off to Portugal this September to compete in the Trampoline World Cup.  After placing first in the National Trials held in Montreal earlier this year, Samantha received an invite to the World Cup, where she placed 5th overall – a personal best. Samantha, who also serves as the Sports PT BC Representative in our student society, even completed a midterm overseas the night before the final competition! Samantha will finish the season in early November at the World Championships in Bulgaria.

We congratulate Samantha on this notable achievement!