For urban Canadians recovering from injury or illness, access to the physical therapy they need is rarely in question. For BC residents in northern or rural locations, however, access to health professionals can’t be taken for granted. In northern and rural BC, the numbers of physicians and care givers is worryingly low, with 28 physiotherapists per 100,000 people in northern BC, compared with an average 62 physiotherapists per 100,000 people in the province as a whole. These physiotherapists are essential to helping people recover from issues as serious as strokes, sports injuries, and traumatic surgeries.

In 2012, UBC established the Northern and Rural Cohort (NRC) to give Master of Physical Therapy students greater access to province-wide learning and to encourage these trainees to settle in locations that are currently underserved by health professionals. With support from physical therapists currently practicing throughout Northern and Rural BC, NRC students are getting a taste of what our province’s rural and remote communities have to offer. 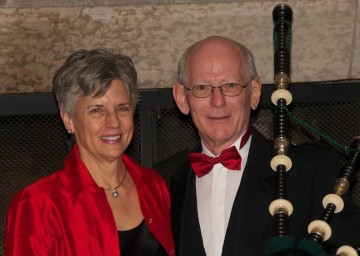 Elizabeth MacRitchie, UBC Rehabilitation Sciences graduate of 1970 and longtime Prince George physiotherapist, has seen the health care struggles of northern BC first hand. After her husband Donald completed his medical residency, both Elizabeth and Donald travelled to Prince George with the intention of practicing in the north for two years – and they never left. “There is a huge need for physical therapists in the north, and we like living here,” Elizabeth says, “It is an honour to give back to a community that has become our home.”

Today, Elizabeth is dedicated to helping UBC inspire students to practice in underserved areas and resolve our communities’ health care divide. Together with fellow alumni Lesley Schwab, Vicki Laverdure, and Johanna Jenkins, Elizabeth established the NRC Travel Award in Physical Therapy. The award offers one or more NRC students up to $1,000 toward their travel expenses during rotations, when students spend at least five months in rural communities like Dawson Creek, Fort St. John, Prince George, Quesnel, Terrace, and Prince Rupert. It encourages students in greatest financial need to pursue their passion for care and to explore some of the province’s most remote areas. As the NRC Travel Award in Physical Therapy broadens the horizons and expertise of health professional students, it encourages many of them to continue their practice outside of Canada’s major cities.

“With the costs of education rising, we knew that the travel and accommodation costs associated with placements outside the Lower Mainland might be a barrier to some students who were interested in practicing in rural communities after graduation,” Elizabeth explains. “This award is a small way for us to help students to offset those costs.”

Expanded opportunities for UBC medical students to be educated across the province have already helped to address some of our province’s health care disparities. Between 2003 and 2010, the number of physicians in rural BC increased from 1,770 to 2,269. Now, the Northern and Rural Cohort in Physical Therapy aims to create a similar trend for physiotherapists in rural BC. An influx of PT graduates will help people in northern BC to get the rehabilitation they need to address pain and mobility concerns.

To support the continuing education of RNC students during their clinical placements and to connect clinical instructors in physical therapy to professional development opportunities in Vancouver, UBC opened a physiotherapy teaching lab in Prince George in December of 2012. This lab contains state-of-the-art physical therapy equipment and supports a strong partnership between the University of Northern BC and UBC in an effort to bring higher education and practicing physiotherapists to a population in great need. This lab has become a hub for clinical learning opportunities and for northern physiotherapists who want to grow in their field.

Now, help is closer to home for all BC residents.  UBC health professional students are traveling to more areas of the province than ever before, increasing their understanding of the disparate health needs that exist across BC.